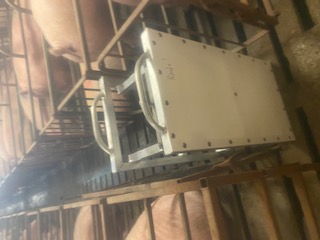 Jewel White, Ronald Nayre and Jim Kehler of Maple Leaf Agri-Farms in Landmark, Manitoba won the award for their innovative "Backspacer device." Their device makes blood collection safer and less stressful by moving the pig forward to the end of the stall during the process so it cannot back up. This also gives better access to draw blood.. They conceptualized a smooth spacer that could be inserted behind a pig – almost like moving a car seat forward so the driver is well positioned and secure and created a light, aluminum device that could be inserted into the stall during the process and moved to the next stall when the process is complete. 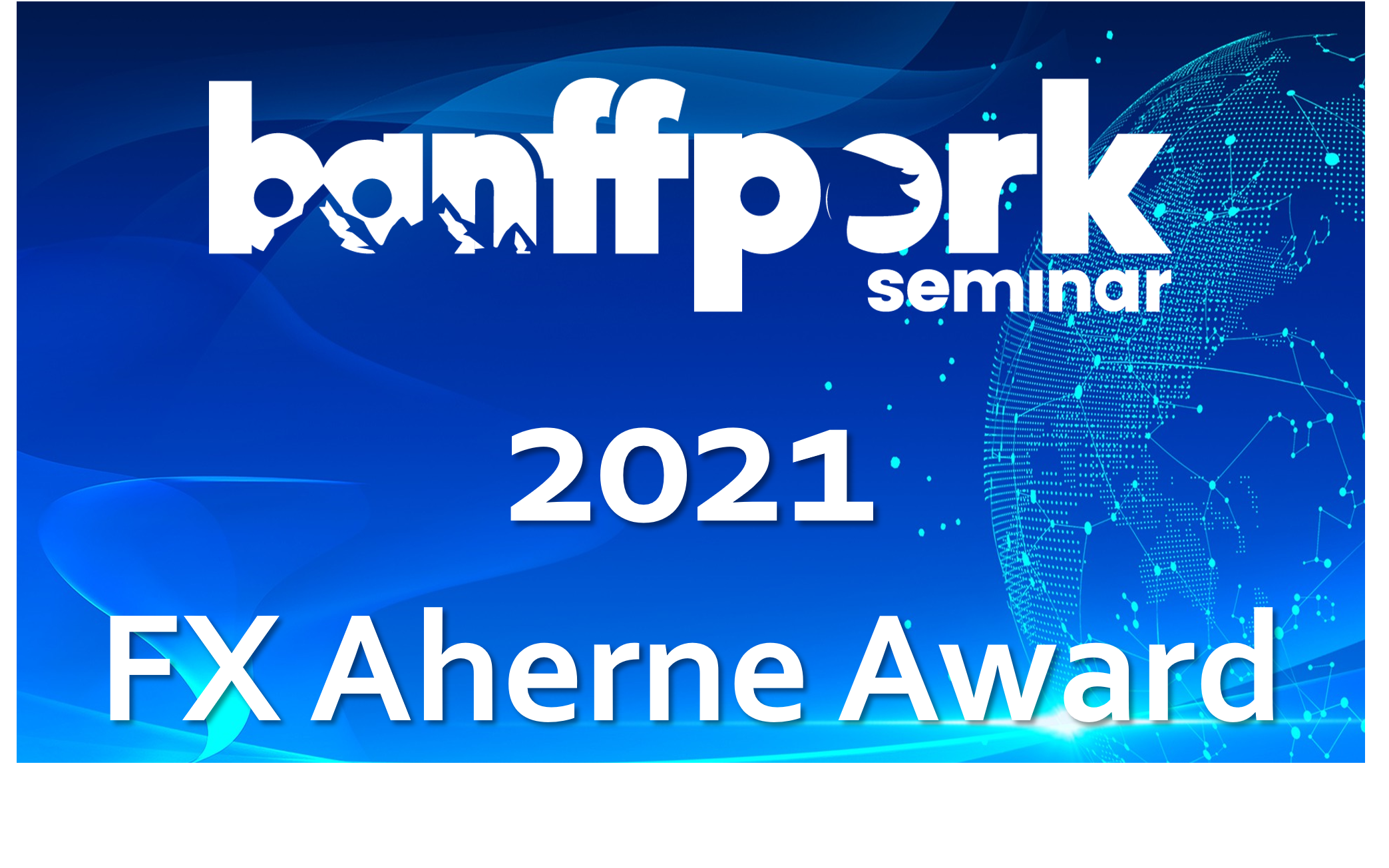 Martin Gosselin from Agri-Marche in Quebec won his award for an innovative "safety bracelet" grip control for power washers in the barn. Power washers require enormous force and the repetitive effort required by workers to control them can lead to a range of occupational health issues of the forearm for workers. Typically these washing wands are controlled with some makeshift holders or not at all. Drawing from ideas he saw in the watercraft, snowmobile and cycling industry, Gosselin designed a grip that allows the worker to hold and fully control the trigger without undue strain. It also ensures its safe use by allowing easy shut down of the equipment. 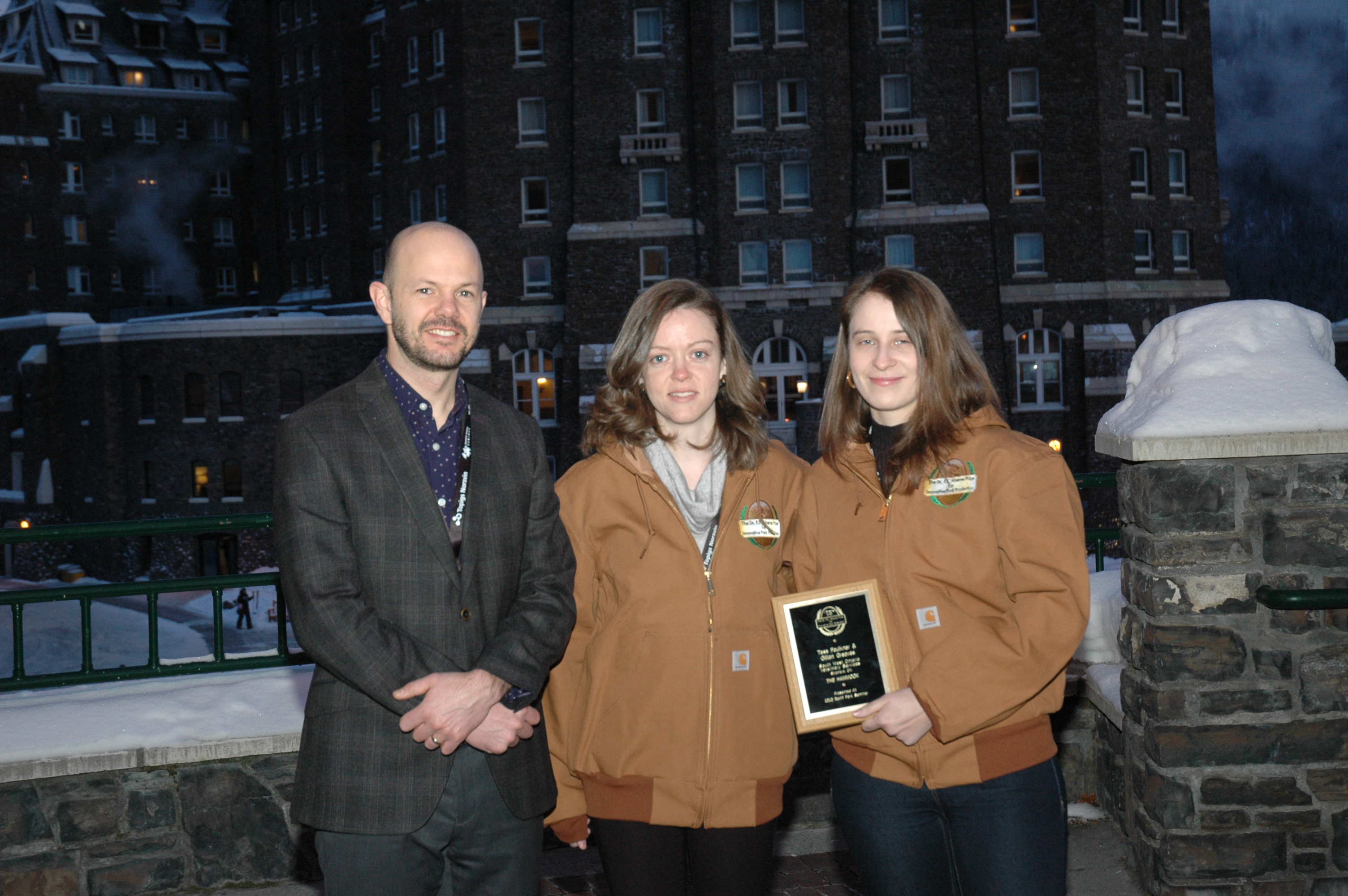 Tess Faulkner & Gillian Greaves from South West Ontario Veterinary Services accepted the award for their innovation "The Hammock." The Hammock restrains the pig to allow both the operator and the animal to relax. Instead of using a sorting board or their body to restrain the animal, animal care staff is able to place the piglet into the restraint, keeping both hands free to safely operate euthanasia devices such as a captive bolt gun, ensuring accurate placement of devices. 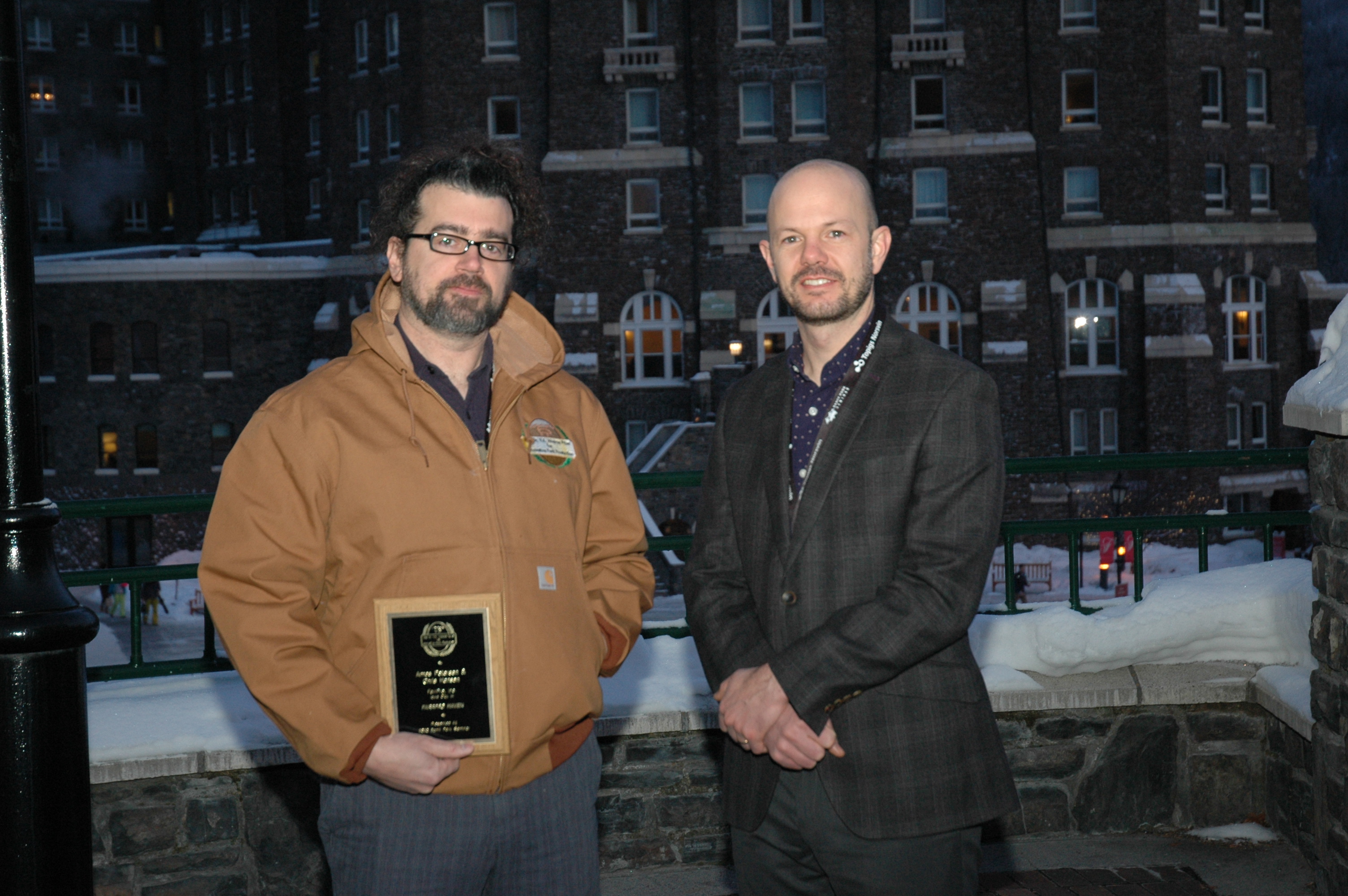 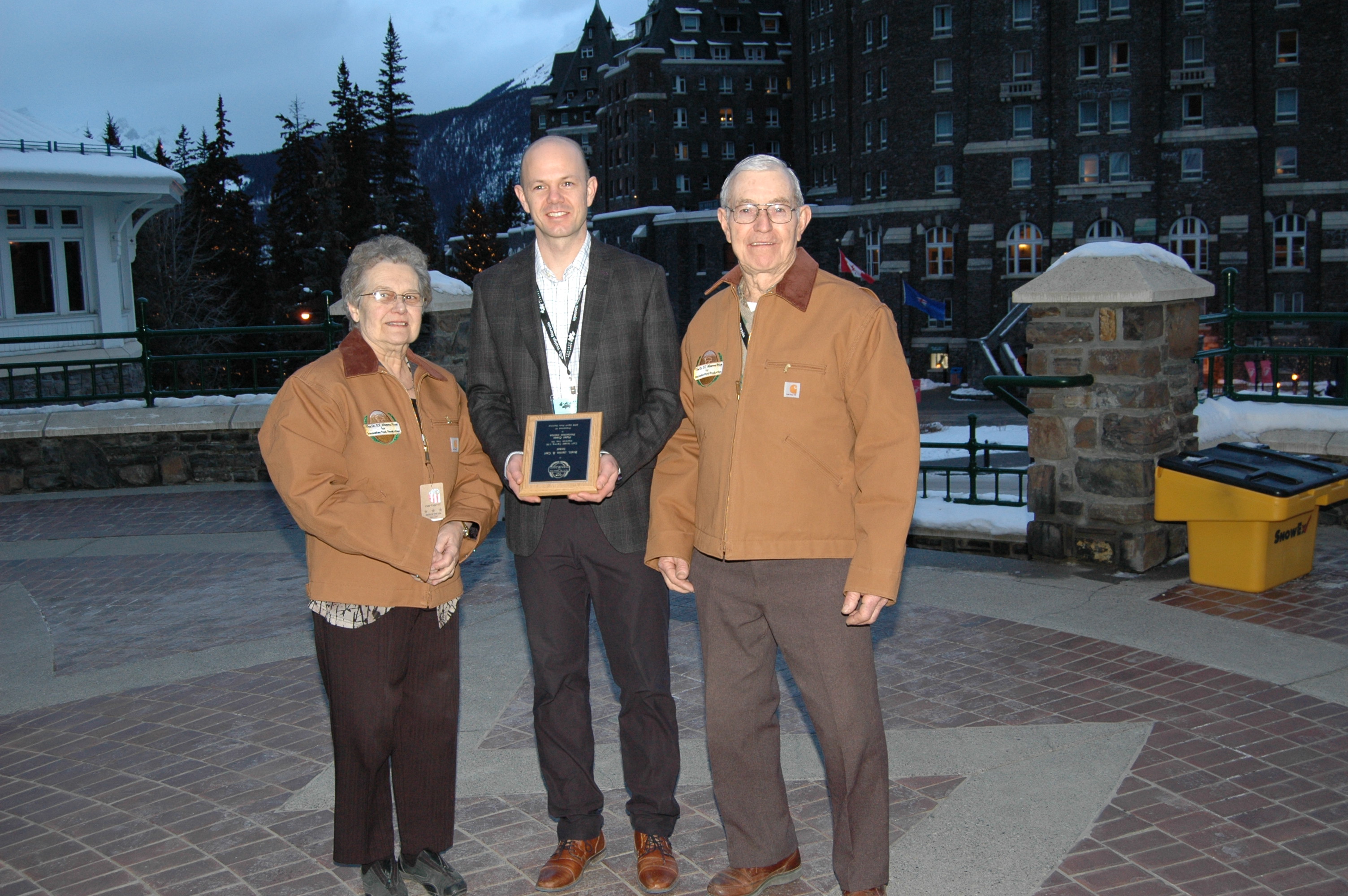 Out of pure desperation we took left over building materials from our recent barn construction, and fastened together a triangular plastic divider that slides over our pen creep dividers. The divider establishes a defined safe creep area under the heat lamp away from the reach of the sow.By utilizing our creep protection device we have developed a process for training piglets to find the creep area, significantly improving our weaning rates. We have effectively increased our weaning rate by one piglet per sow per litter. 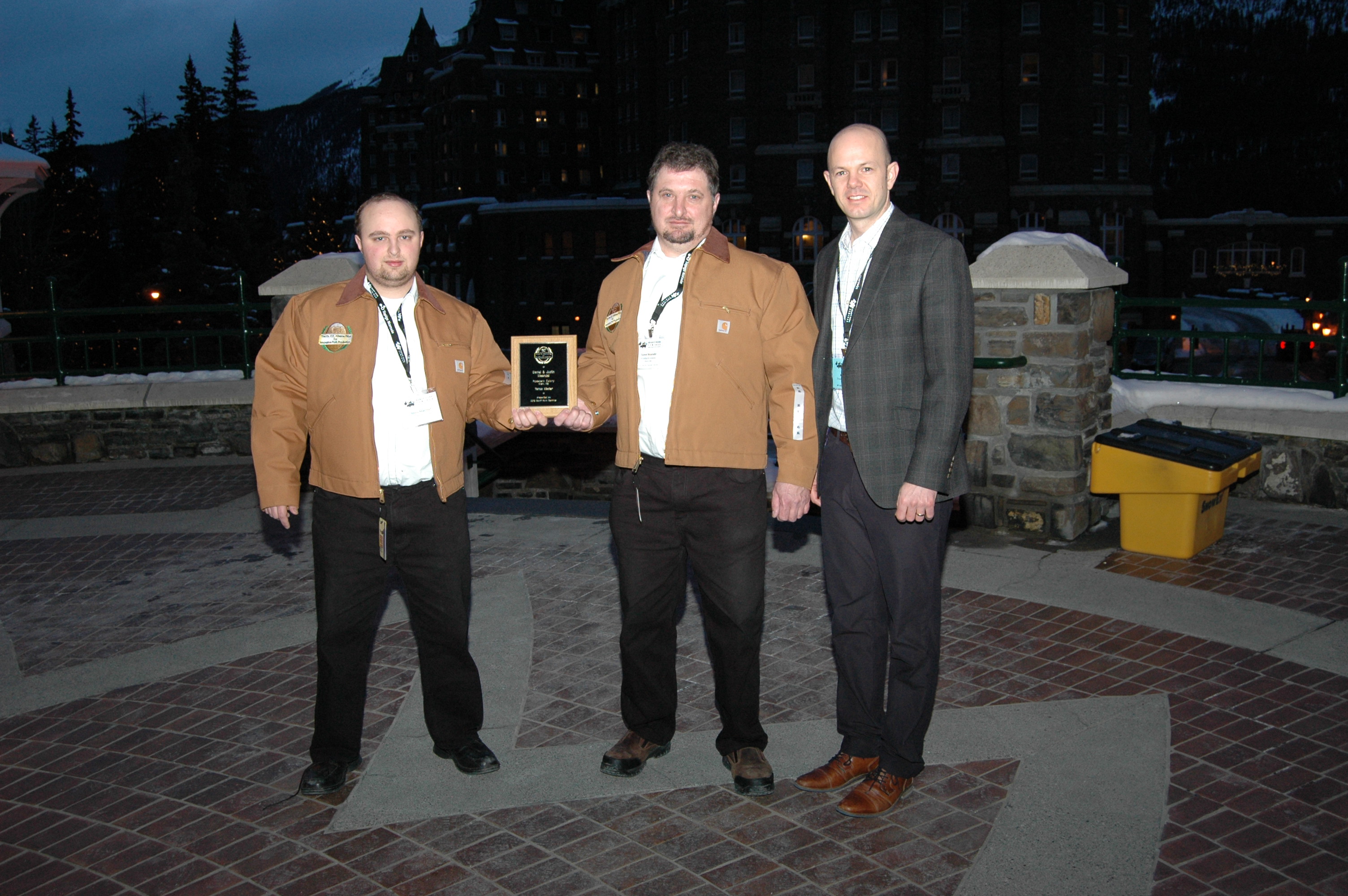 Justin & Daniel Maendel accepted the award for their Tattoo Master innovation. Their idea puts less stress on animals and the people handling them. And it automates tattooing, a job that normally requires hard work for people.

Tattoo Master is an automatic tattooing solution designed to ease the burden of everyday hog tattooing while keeping animal welfare and legibility of tattoo as top priorities. It can be mounted on most automatic hog sorters with very little to no modifications, or custom fitted to most others. The simplified solution means the only thing that needs to be done is add ink every 400 hogs. The stainless steel unit can be easily washed with a power washer when required. 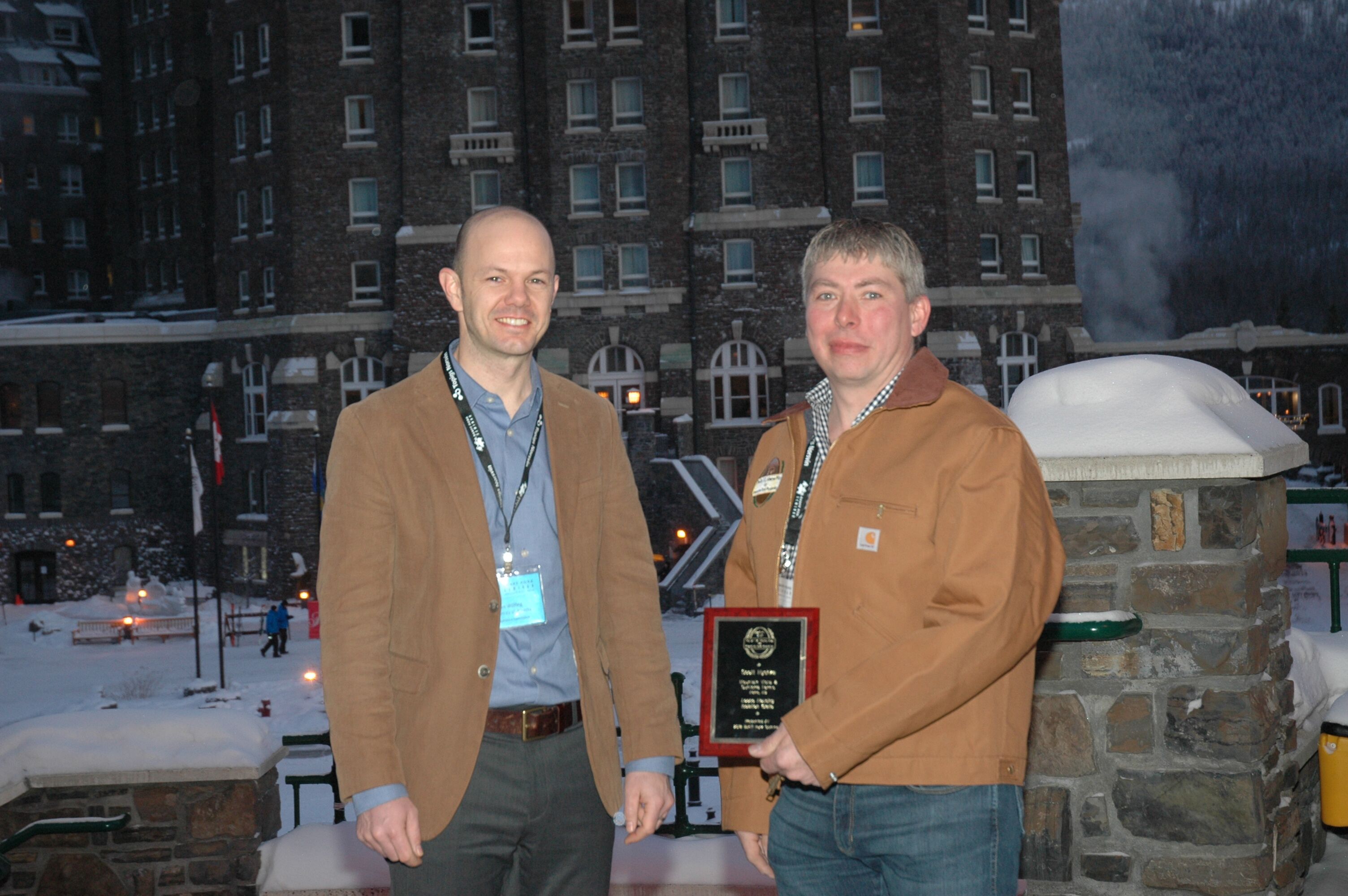 Scott Hyshka from Mountain Vista Farms & Sunterra Farms accepted the award for his isolation crate for loose housing innovation. The collapsible crate he designed is in every loose pen on their farm. The pen can be opened to house an animal that requires segregation for additional nutrition or to have refuge from aggression. If the pen is not needed it will remain folded up against the pen wall.

The benefits of this are that the isolated animal remains in the loose pen with her pen mates. This allows the sow to re-enter the group when fit. The pen being within the loose pen does not require additional space in the farm to be set aside for sick or poor sows. 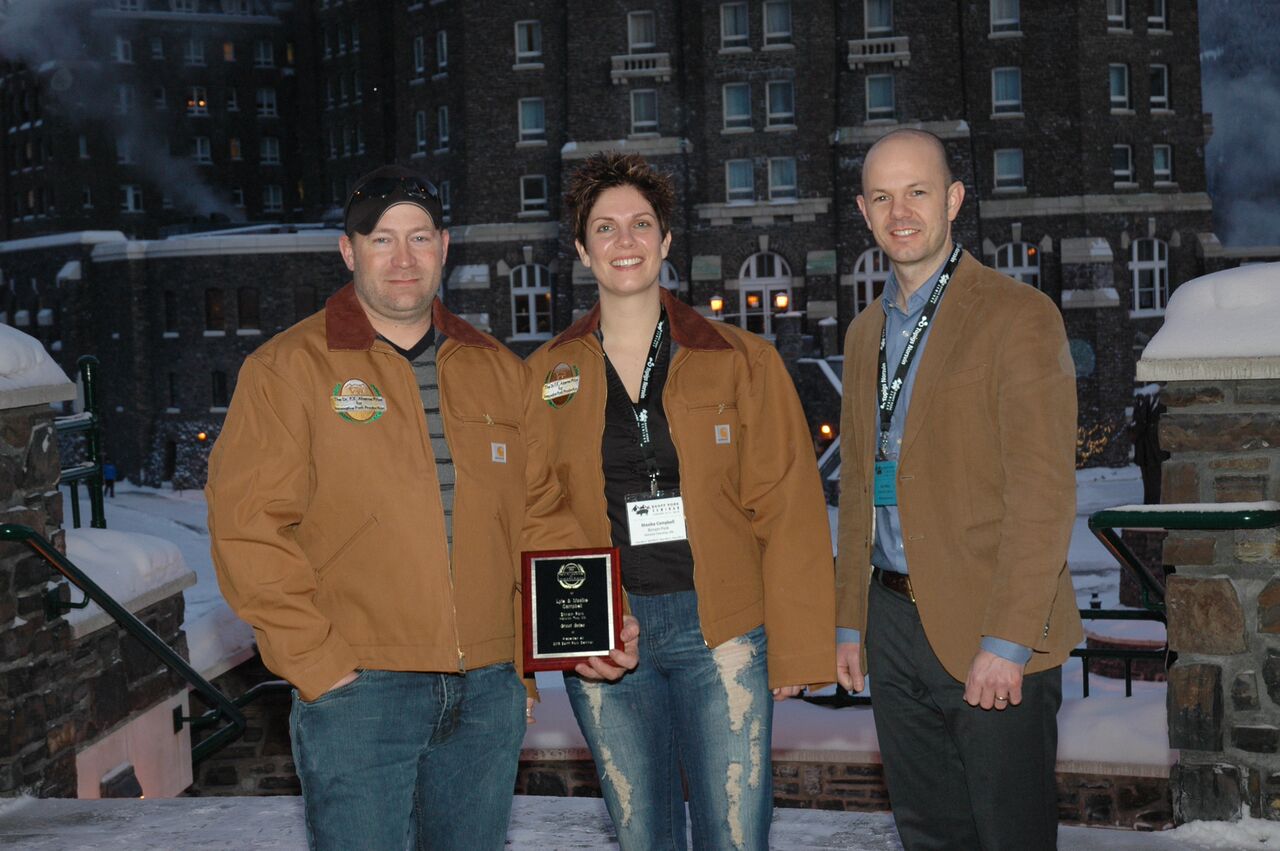 Winner of the F. X. Aherne Award for Innovative Pork Production at the 2018 Banff Pork Seminar, Lyle & Maaike Campbell from Birnam Pork in Arkona, ON.

Lyle & Maaike Campbell from Birnam Pork accepted the award for their innovation called Ghost Gates.  After installing gilt crates for breeding, we quickly discovered that even with a short and narrower footprint they still left plenty of room for the gilts to move around. Usually this wouldn’t be a big deal except that at the time of breeding when it made it difficult to maximize breeding potential. That’s because during breeding, gilts moved substantially, turned around the odd occasion and at times even lost artificial insemination (AI) rods.

Using some leftover steel they had available they designed a "ghost gate" that could easily be placed behind the gilts while breeding them.  The gates easily slide behind the gilts and can be kept there for the duration of the breeding to promote nose-to-nose contact as well as decrease the chances of the gilts in the common pen pulling the AI rods out of the gilts being serviced. 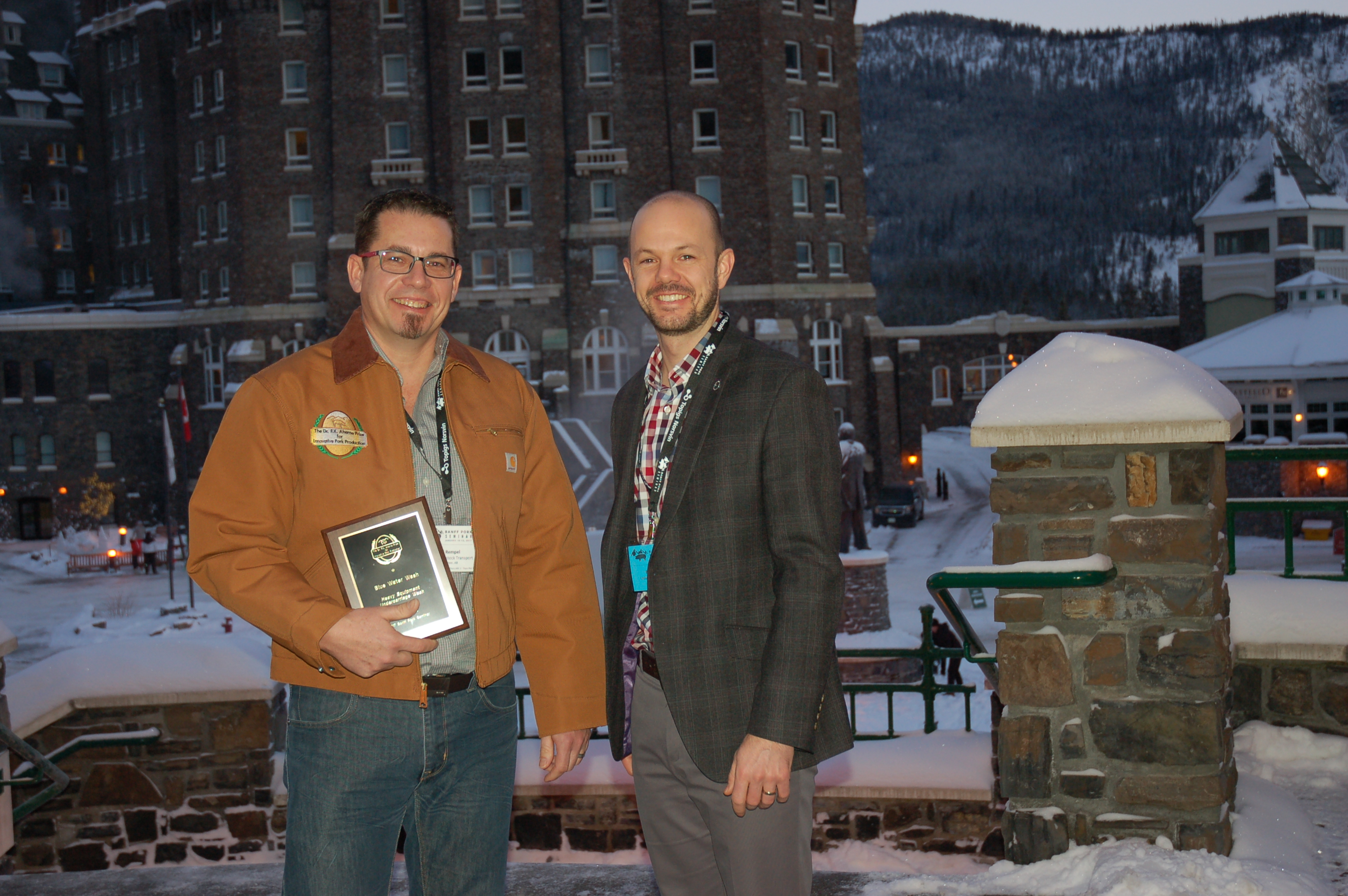 Bill Rempel of Blue Water Wash accepted the award for the company’s innovative new heavy equipment undercarriage wash. There has never been a way to wash all organic material from underneath livestock trailers. Organic material has the potential to carry and spread diseases which is a threat to our industry. Blue Water Wash has researched and developed an undercarriage wash which is operational in our new state of the art drive through wash bays in our Blumenort, MB facility.

The System uses 24 high pressure spinning nozzles along with 90 GPM of water to thoroughly clean the underside of any livestock trailer that runs through it. To finish off the undercarriage wash, disinfectant is then applied to the underside of the trailer as it exits the wash bay.

Sam Gelowitz from the Prairie Swine Centre received the award for an innovative carcass removal cart. The carcass removal cart is designed out of safety and ease of removal of dead sows and large grow finish pigs from the building. Previous carts use a vertical manual winch system to hoist the carcass, which became top heavy when transporting animals to the disposal site, and took a lot of manual labor. The new design transports animals safely with a minimal amount of lifting by employees. The design uses a 2,000 pallet jack, a parcel and product rolling system and a 12 volt electric 2,000 lb. winch.

Steve’s Livestock Transport received the prize for a new hydraulic lift deck trailer. The new hydraulic lift deck trailer was designed in conjunction with Wilson Trailer Company of Sioux City, Iowa. The all-aluminum deck system has a powerful hydraulic lift cylinder and stainless steel cable system that raises two full length decks into locked position. It acts as an elevator to lift livestock into different deck levels, which eliminates ramp usage to enter or exit the trailer. That reduces animal fatigue, stress and injury during movement and improves meat quality. 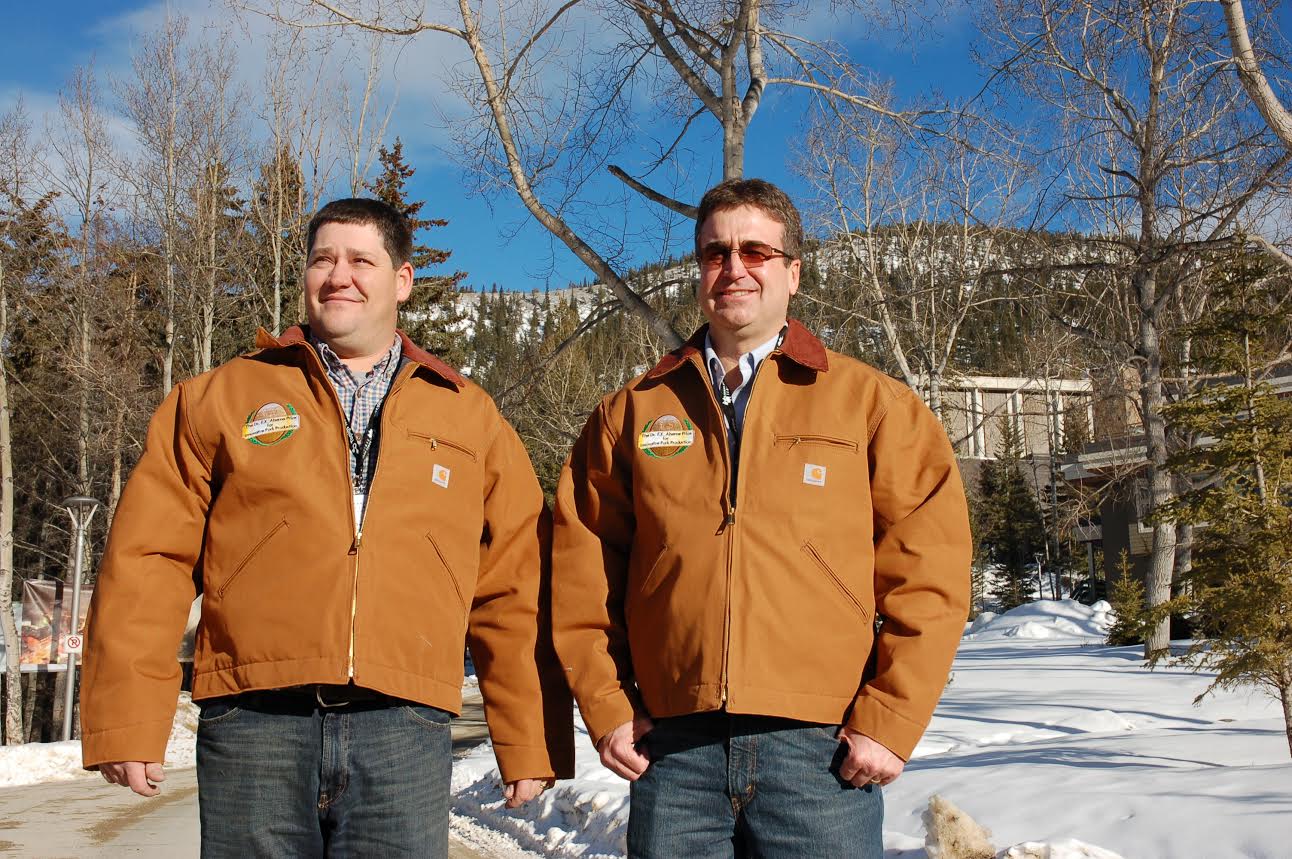 Greg Feenstra and Dave Uttecht of Heartland Pork won for their "EZ Tub" hog handling innovation which significantly reduces stress on animals and people. The E Z Tub circular tub-style design works with pigs’ natural response patterns to aid in the loading of market hogs. The pen and gate configuration lets the handler work where hogs can see them and uses the pigs’ circling behavior to set up a flow onto the trailer. That reduces stress and produces fewer discounts for injured animals at the packing plant. 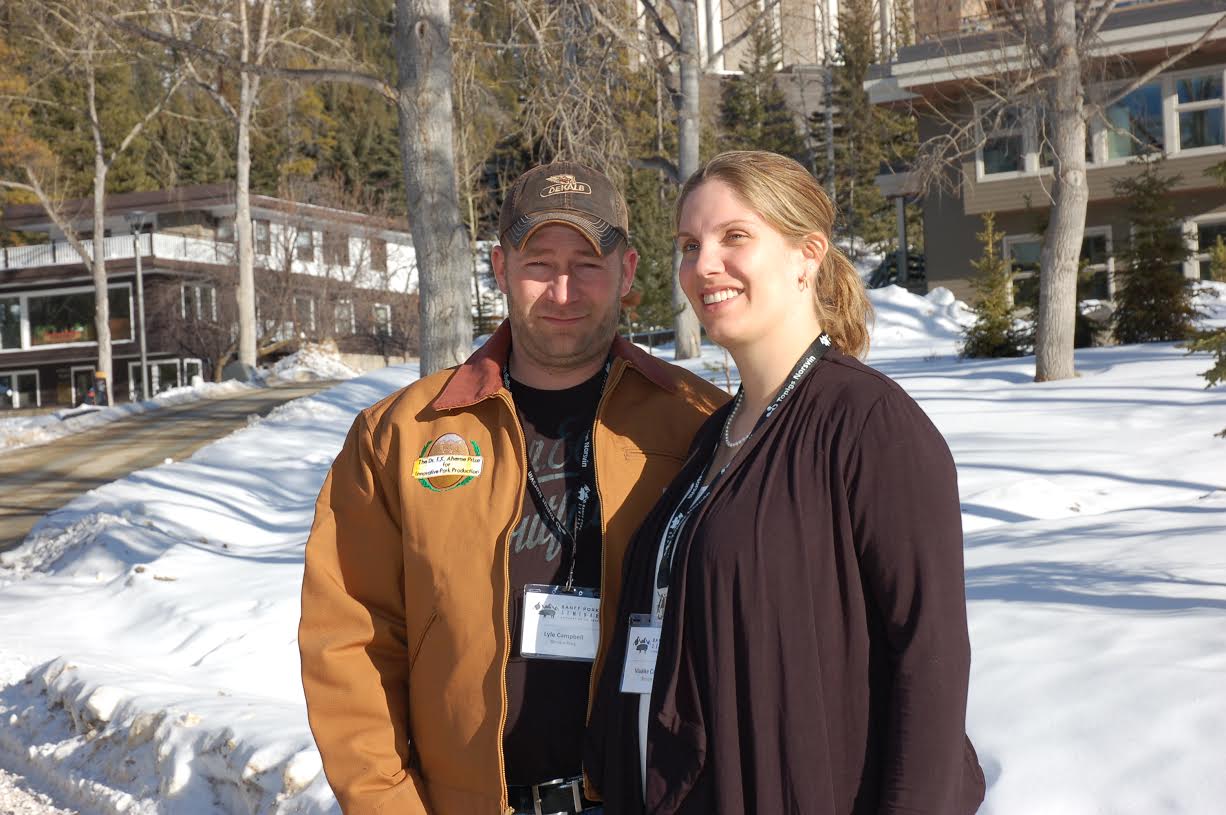 Lyle and Maaike Campbell of Birnam Pork won for an innovative piglet weigh scale which boosted profitability in that operation. The Campbells’ innovative solution to weighing young piglets was low cost and had a direct benefit on their bottom line. Birnam Pork produces weaned piglets that excel in the grower-finish phase of pork production. They needed some way to weigh those piglets so they could ensure they were meeting marketing objectives and getting paid for their efforts. 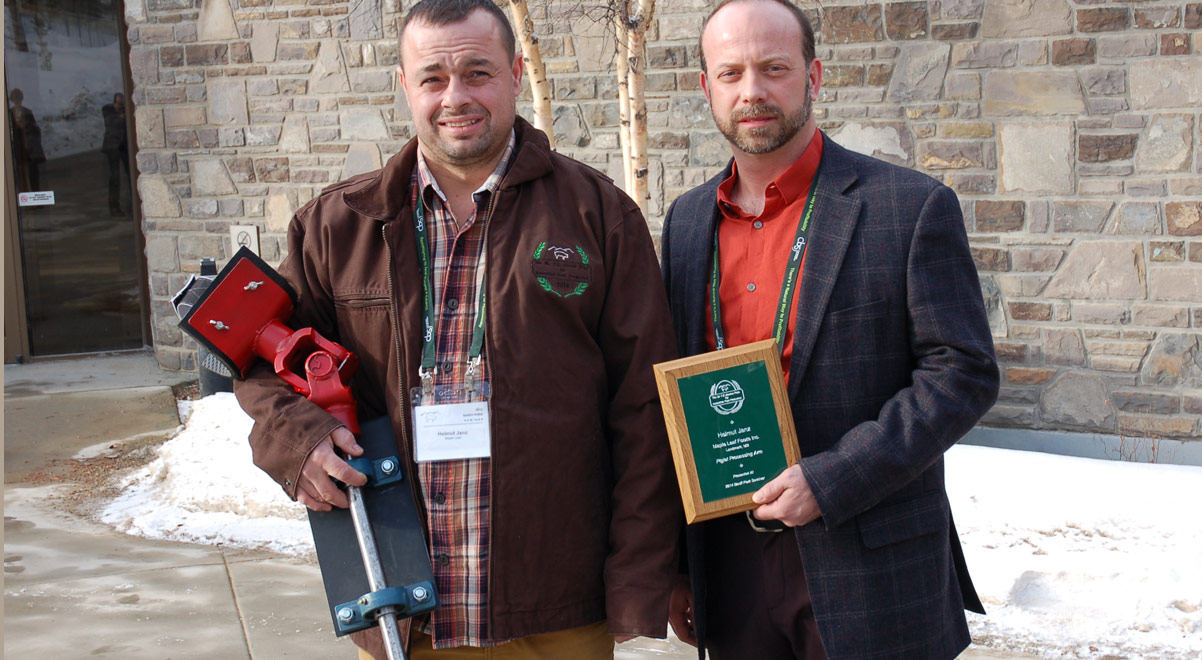 The winner of the F. X. Aherne award for Innovative Pork Production at the 2014 Banff Pork Seminar is, at right, Helmut Janz of Maple Leaf.

Helmut Janz is a Barn Manager with Maple Leaf in Zhoda, Manitoba. He developed the "piglet processing arm", which gently and safely holds the animal and allows it to be pivoted and rotated during the handling process. With this new tool, processing tasks such as injections, tattooing, castrating, tail docking and oral drenching can now all be done with the piglet in the cradle by swiveling the arm to the correct position. Because the piglet can be processed without being held and squeezed by staff, there is less stress on the animal. Processing tasks are also safer for employees by eliminating the potential for many repetitive stress and strain injuries. 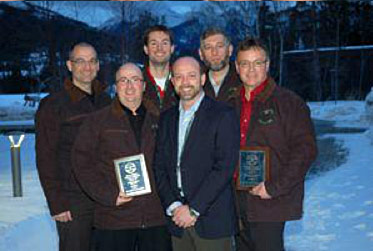 Innovation is the lifeblood of the pork industry as it builds a new path to the future. Three examples of innovative thinking were showcased as the Banff Pork Seminar presented the annual F.X. Aherne Prize.

"Each of the winners have provided unique and valuable contributions to improve pork production," says Dr. Michael Dyck of the University of Alberta, chair of the F.X. Aherne prize committee.

On hand to accept awards were: 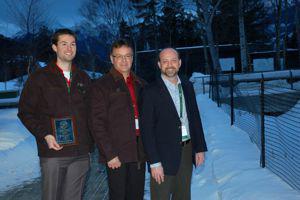 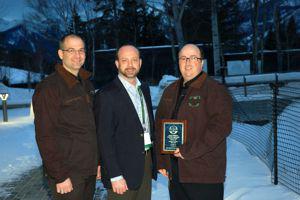 Bench Colony. Presented to Joel and Ron Wurz of Bench Colony, near Shaunavon, Sask. Earned for development of a device to hold pit plugs in place. 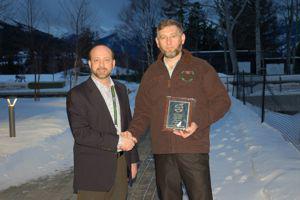