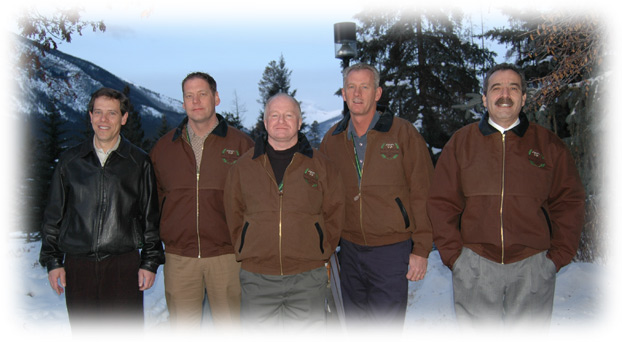 Banff, Alta. Jan. 18, 2007: Several key players in the western Canadian pork industry were recognized for their innovative contributions to the field of pork production at the 2007 Banff Pork Seminar, held Jan. 16-19.

The winners of this years F.X. Aherne Prize for Innovative Pork Production include Shokry Rashwan of the Manitoba-based Puratone Corporation and Ernie Kehler, Kevin Barkman and Wilf Sawatzky of Hytek Ltd, also based in Manitoba.

The pork industry relies on new, practical innovations to tackle the challenges it faces on an ongoing basis, says Dr. Eduardo Beltranena of Alberta Agriculture and Food (AF) and chair of the F.X. Aherne prize committee. The purpose of these awards is to recognize innovation and honour those who have gone the extra mile to contribute to the overall growth of the industry.

The awards namesake, the late Dr. Frank Aherne, was a professor of swine nutrition and production at the University of Alberta in Edmonton and a driving force in the western Canadian pork industry for many years before his death in 2005. These awards honour Frank by recognizing those who have also developed valuable new concepts and technologies and, in doing so, have continued Franks legacy, says Beltranena.

Shokry Rashwan received the award for his development of the Barnmax system, a computer-based visual management tool that monitors input levels for hog barns. The Barnmax system has the potential to save significant costs to producers by decreasing waste of electricity, fuel, feed and water, says Beltranena.

What’s unique about Barnmax is that it uses barn-specific target consumption levels, instead of historical values, as a baseline. Measuring consumption against historical data can result in continued mismanagement, while measuring against the target can greatly enhance efficiency.

The team of Ernie Kehler, Kevin Barkman and Wilf Sawatzky received two F.X. Aherne Prizes. The first was for their Guaranteed Proportion for Solution Application Machine, designed to reduce the amount of cleaner solution used when cleaning hog barns while still applying the correct concentration of solution at an even rate.

This innovation can help pork producers in several key areas, says Beltranena. For example, by removing the influence of water volume, pressure and other factors, it uses less cleaning solution per minute than regular pressure washers. Also, because its been designed to apply the right concentration of solution at an even rate, it can reduce the quantity of bacteria and viruses in barns, meaning reduced medication use and a healthier herd.

Kehler, Barkman and Sawatzkys second F.X. Aherne prize was for their Lime Solution Application Machine, designed to more effectively disinfect slurry pits using lime. Although lime is more cost effective than conventional disinfectant, many producers find applying it to slurry pits an awkward and unpleasant job because lime is very dusty and hard to apply evenly, says Beltranena. However, this machine tackles those disadvantages by applying it evenly and generally making lime easier and safer to use.

As only the hoses of the machine are brought into the barn, the unit can remain outside, making it easier to move the bags of lime to the liming machine. This system virtually eliminates the need for the backbreaking carrying of bags of lime from the pallet outside to the far ends of the barn, says Beltranena.

The award applies to producers, owners, production managers or consultants in the western Canadian pork industry, and all innovations entered must be in use on a farm in Western Canada. Innovations nominated fit into one or more of six categories: improved productivity, improved profitability, improved working conditions, improved animal well-being, reduced impact on the environment, and improved pork quality or food safety.

The Banff Pork Seminar is co-ordinated by the Department of Agricultural, Food and Nutritional Sciences, University of Alberta, in co-operation with Alberta Pork, Alberta Agriculture and Food and other pork industry representatives from across Canada.