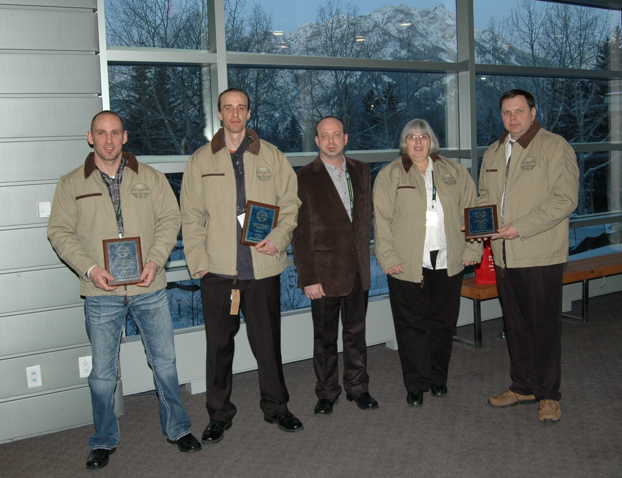 "All successful industries are built on the ability to innovate," says Dr. Michael Dyck of the University of Alberta, chair of the F.X. Aherne Prize committee. "The innovations developed by each of this year’s award winners are all very significant contributions to the pork production industry and are all deserving winners." Garrett Gerbrandt received the award for his invention of unique, livestock-friendly loading plates for finishing farms, which are used throughout the Puratone corporate farm system. The loading plates are designed to lessen the stress of loading market hogs to ship to the packer. The loading plates are designed to swing out towards the loading ramp to funnel the hogs through the loading ramp. This avoids piling up caused by pigs hitting the walls on either side of the ramp.
Gerbrant - Loading plates - The Puratone Corporation

The recognition for Mary Haugh and Peter Jones of LMR Inc. was for their invention of the "Longarm" – a uniquely designed animal handling tool that requires up to 70 percent less time to clear a pen. It supports easier, faster and safer animal handling.
Haugh and Jones - Longarm - LMR inc